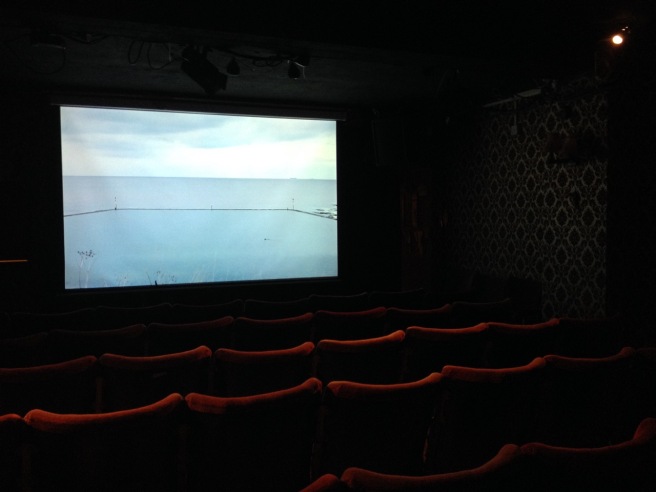 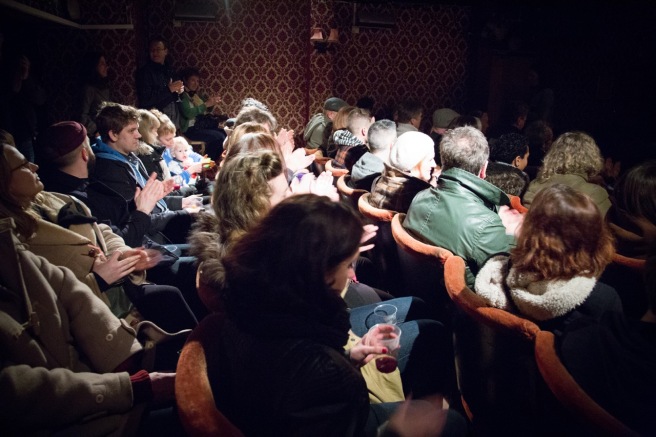 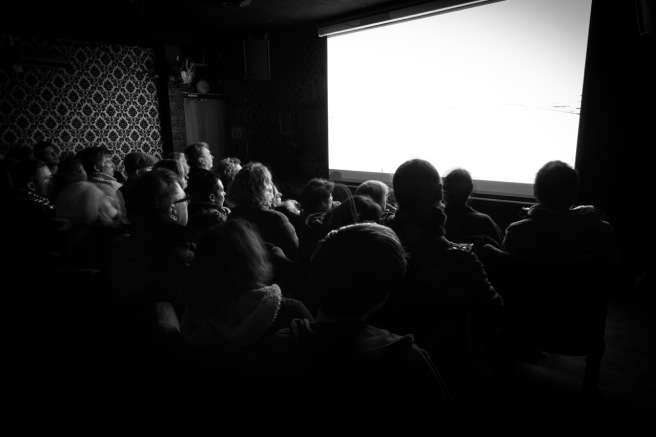 Photos from the screening of ‘In our blood’, a newly commissioned film as part of the Home residency project 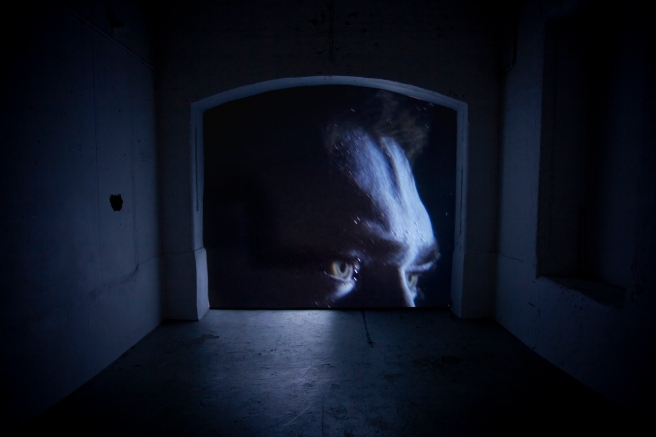 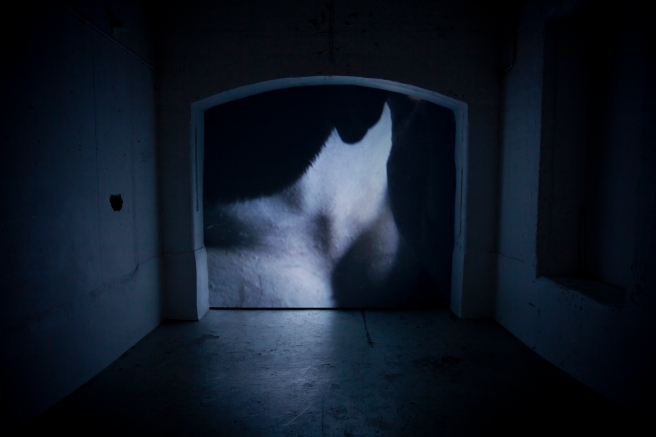 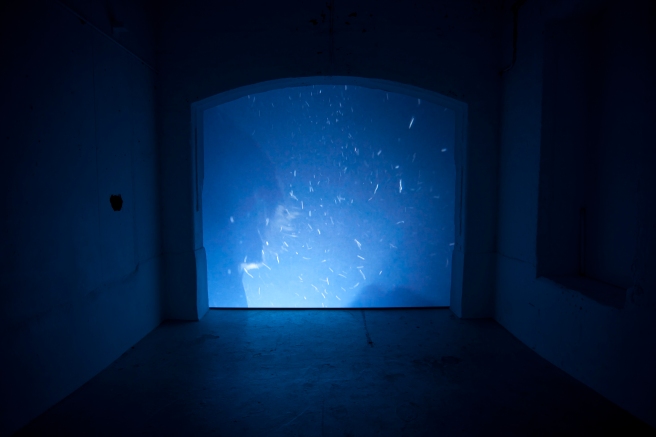 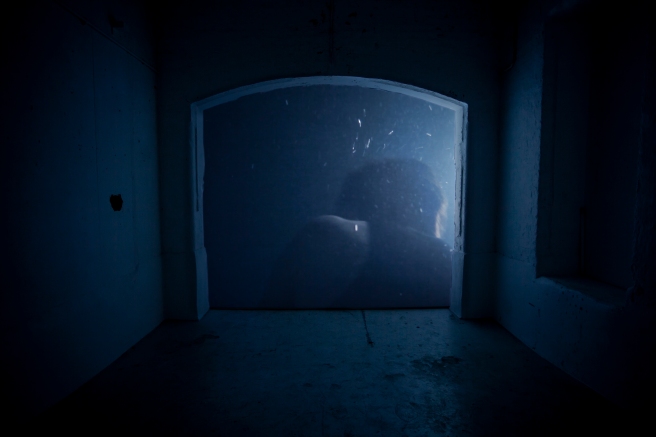 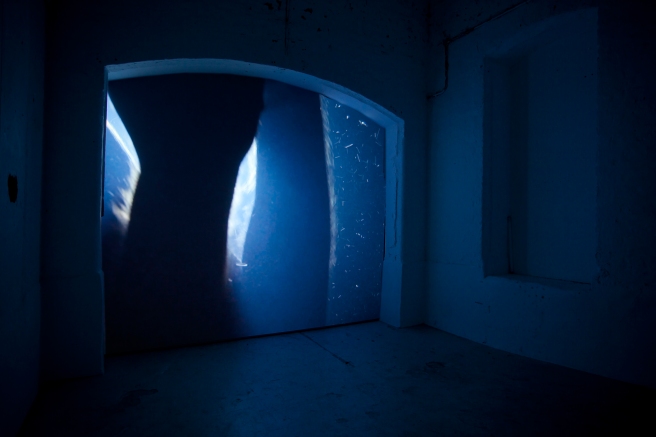 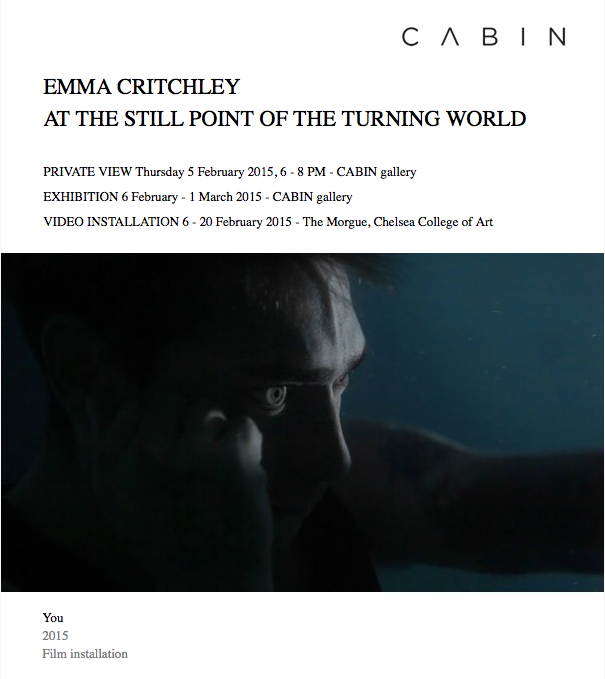 CABIN gallery is delighted to announce At The Still Point Of The Turning World, a solo exhibition of photographs and video installation by Emma Critchley.
In water, not only are shape and form suspended, but so is time. Words, limbs and breath float in an eternal present moment, neither past nor future, neither moving nor completely still. They are caught literally mid-breath, confronting the viewer with the ephemeral and ethereal nature of time.
The effect is one of a world made up of shadows, sunlight refracted and metamorphosed as it travels through the density of water, imbuing everything with blue light. Here, we are presented with another world – one in which sound and movement are warped, and everything is on pause. “For me being in water evokes a sense of time that is different to how we usually think and experience it. I am interested in the heterogeneous nature of time,” explains Critchley. “Underwater there is a sense that time decelerates; the density of the space means one has to physically slow down and adjust how you move, which has a psychological impact.” It also reminds her of the temporality of being human, as one’s existence under water is dependent on how long a breath can be held for. “Our existence in this space is a suspended moment between in-breath and out, yet it is a state that can only ever be transitory, as it is dictated by our bodily limits,” she explains. “It is an experience that is very much focused on the present moment, which allows a certain detachment from the everyday.”
The exhibition also includes a concurrent off-site screening of Critchley’s video installation You at the Chelsea College of Art. Critchley has worked with film and video for the past five years. The shift to working with moving image was a natural one, happening gradually as her work became more temporal; at the time focusing on the breath and duration. In You, she depicts the struggles of an internal battle, the densely silent underwater environment acting as a metaphor for an internal space – one in which both viewer and subject are caught in an eternal present moment. There is a sense of being out of sync with the world, as the thick liquidity of the space resists the impact of the central figure’s throws.
READ MORE
EXHIBITION
CABIN gallery, 11 Brookwood Road, SW18 5BL
FILM INSTALLATION
The Morgue, Chelsea College of Art, 16 John Islip Street, SW1P 4JU
Cabin Gallery Opening Hours: Wednesday, Friday & Saturday 10-6pm. Or by appointment